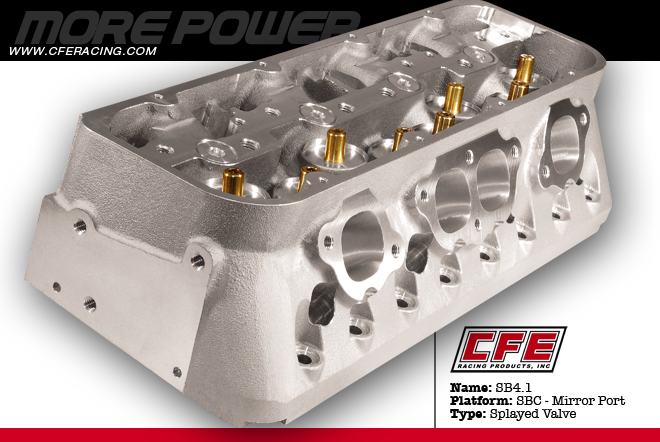 Our development of the GM SB2.2 head has contributed to numerous victories and records. The stats show it with several wins in all three of NASCAR?s premier series including three Sprint Cup Championships. In drag racing, multiple racers have picked up significantly and races have been won in both NHRA Super Stock and NHRA Comp Eliminator.

CFE?s newest Small Block head the SB4.1 is based on the SB2.2 knowledge acquired from years of on and off-track development in both drag racing and circle track applications. The mechanics of the SB4.1 very closely resemble that of the SB2.2 including the mirror image intake port layout, making it an ideal choice for single four barrel applications. This design targets the runners toward the center of the engine which improves distribution, making the intake charge more uniform across all eight cylinders. The SB4.1 features revised guide locations which allows for more programs to cover various applications that the SB2.2 is not compatible for, like turbocharging and nitrous applications.

The CFE SB4.1 also features larger valve combinations which in turn offers increased support for larger displacement small blocks. The SB4.1 is one of our most versatile racing heads and should be given a serious consideration if your racing needs require the use of a single four barrel carburetor and/or a cast intake manifold