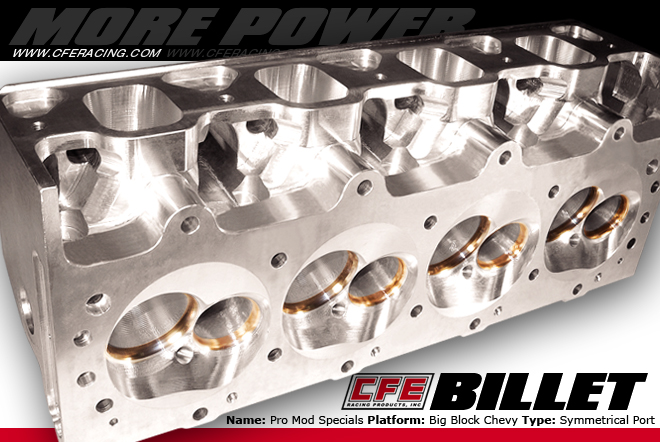 All CFE ProMod heads are now available constructed from 6061 T-6 billet aluminum. 6061 T-6 heads are structurally superior to cast heads and are recommended for applications requiring additional strength due to high cylinder pressure and extreme heat... like Pro Modified. Billet versions are available in either solid or water-jacketed configurations.

The starting point in this lineup of professional mountain motor big block heads is the 5.000¨ version. Introduced in 2003, this head was revolutionary in design. The first generation of nitrous Pro-Mod heads engineered with a symmetrical port layout. Proven in battle these heads reigned supreme for over half a decade and would currently be an excellent choice for Top Sportsman competitors and can easily support powerplants up to 800 cubic inches.

The 5.200¨ raised the bar to support well over 800 cubic inches of displacement. Again symmetrical in design, they were an integral part of the awe inspiring, mammoth Fulton Pro-Mod engines which wreaked havoc on the 2008 Pro-Mod scene. The same bullet was Jim Halsey´s weapon of choice when he shattered the elusive 5-second nitrous Pro-Mod barrier at the 2008 Shakedown.

Now 2011 is upon us and CFE has launched yet another breakthrough in cylinder head engineering... The CFE 5.300¨. This head is easily capable of feeding over 900 cubic inches for the next generation of Pro-Mod engines. Let loose the dogs of war...