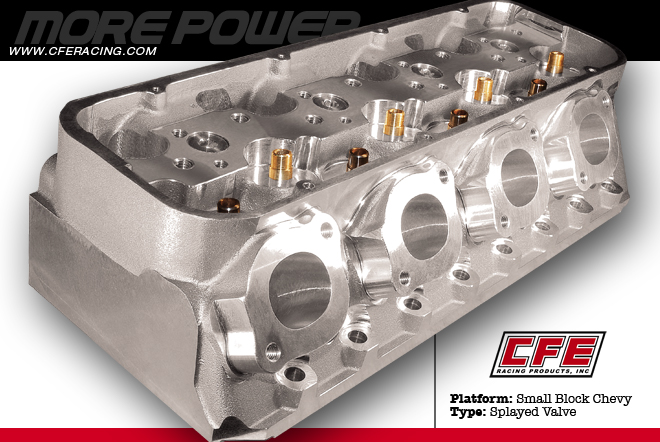 Since 1991 CFE has been developing an experimental Small Block Chevy head in cooperation with top engine builders from around the world. The SBX head as it was appropriately coined was designed to shatter the existing power limitations by maximizing the amount of horsepower obtainable from a naturally aspirated Small Block Chevy. Revolutionary in design the CFE SBX racing head easily produced more than 1000 horsepower on a 358 cubic inch engine. Dominating Pro Stock Truck and setting national records for E.T. and MPH, the CFE SBX head would be forever cemented into the NHRA record books as both the quickest and the fastest Small Block Chevy head ever produced.

The CFE SBX lineup sports many improvements and features that were previously unavailable including a symmetrical intake port layout that favors two carburetors and allows the new CFE SBX racing heads to be used on a standard small block with conventional lifter bore locations. This negates the need for custom blocks and unusual cam cores. Also incorporated into the new CFE SBX lineup is a greatly improved rocker bar platform, structurally engineered to handle abusive environments and increase valvetrain stability. An extensive set of power proven intake and exhaust valve combinations have been added including a 2.250 by 1.600 arrangement for large bore applications.

Discounting the demise of the Pro Stock Truck program, CFE's development efforts toward the SBX project continued. Nitrous, Supercharged and Turbocharged versions have been added to the CFE SBX lineup as well as two new versions for 2010. The newest editions to the SBX ranks include the SBX-A for larger displacement power plants and a solid version for applications under tremendous boost where casting strength is an issue.